Software Engineer and writer from Malaysia

Let take a bit record of my homepage so we can throwback later. This page shows a simple summary of my personal website’s development process and my trials with some screenshots. 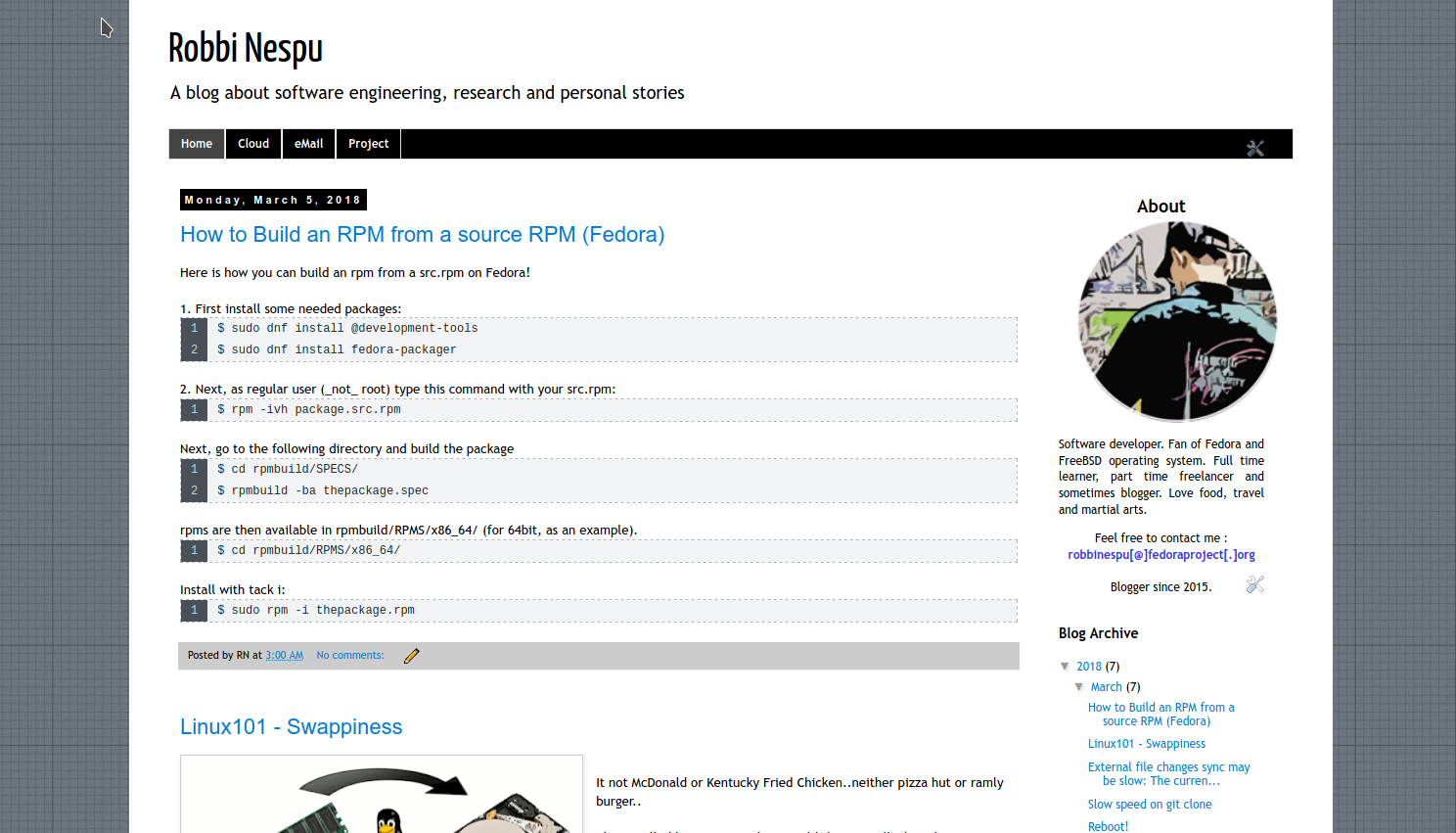 Look at that! This is my first design for my personal blog. I just use blogger platform + blogspot domain at this time, thus theme a self redesign based on existing basic theme from a blog (I forgot her name, but she are undergrad from UTeM that time).

The reason, I start write a blog is because my lecturer Profesor Madya Dr Hj Mohd Sazali (allahyarham) , encourage everyone to wrote. He said it okey if you can’t publish paper or book, but you can write a blog. Make it something useful as amal jariah (benefaction) to everyone who read it.

Then around 2017, I picked kriptonium.com and buy the domain. I park my blogger on this domain. I have shared-hosting server to but I use it for email and my freelance stuff.

Later on, I built blog based on Drupal 8 (let say this is version 1.1 of my homepage) but after a month or maybe a week, I take it down because it too slow for me when I tried accessing the panel and editor. I replace it with Wordpress (I don’t remember what WP version that I use, let take it as version 1.2 of my homepage). Both of it don’t have screenshot, but I can remember both have nice good looking and responsive interface. Sadly, my WP website always been attacked by outsider and spammer keep spamming the comments. I can handle it but it annoying. 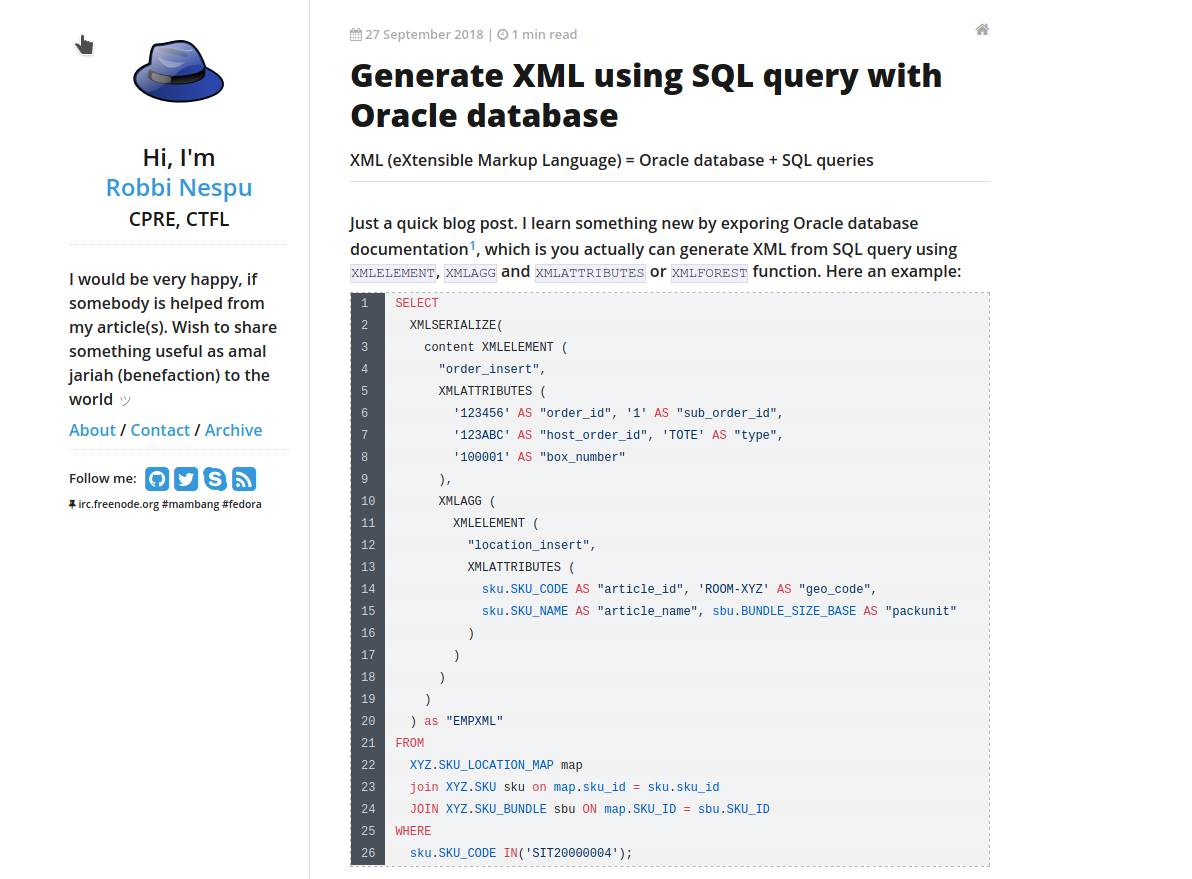 Around 2017, I stop subscribe server hosting because I need to save money. so there is no more dynamic website for me and I revert back to use my version 1.0 homepage. But blogger are too bored especially theming and tweaking are so limited. Mostly depend on some Javascript or external third-party script.

That time, static web generator are new thing and Pelican was top of it. I want to use static web but Pelican is not my options because all website that use Pelican have the same themes (majority, until now. Not sure why).

Then I found Jekyll a blog-aware static site generator in Ruby programming language (almost sound like my name) and Liquid template created by Shopify (also written in Ruby).

Ruby language is been released since 2002 but around 2016-2019 this language is the most adopted language by giant company such as Twitter and start-up. So I think this is best time to learn Ruby in softer way. Then, I pickup Jekyll and host my first static website on Github pages.

Then after I finished my bachelor degree, Github somehow restrict my account and ask me to pay for secret repository and to build pages. Heck! It maybe some bug within Github but I never report and I don’t care much because I been using BitBucket and Gitlab for my freelance job that time.

Gitlab offer more and much better CI/CD compare to Github. So I switched to Gitlab pages without migrate anything from robbinespu.github.io and decided to just start over from scratch on Gitlab platform. I found it much better and cool, it just there is no active trend to watch on Gitlab. Many people still using Github until now. My new static homepage are serving under robbinespu.gitlab.io domain. 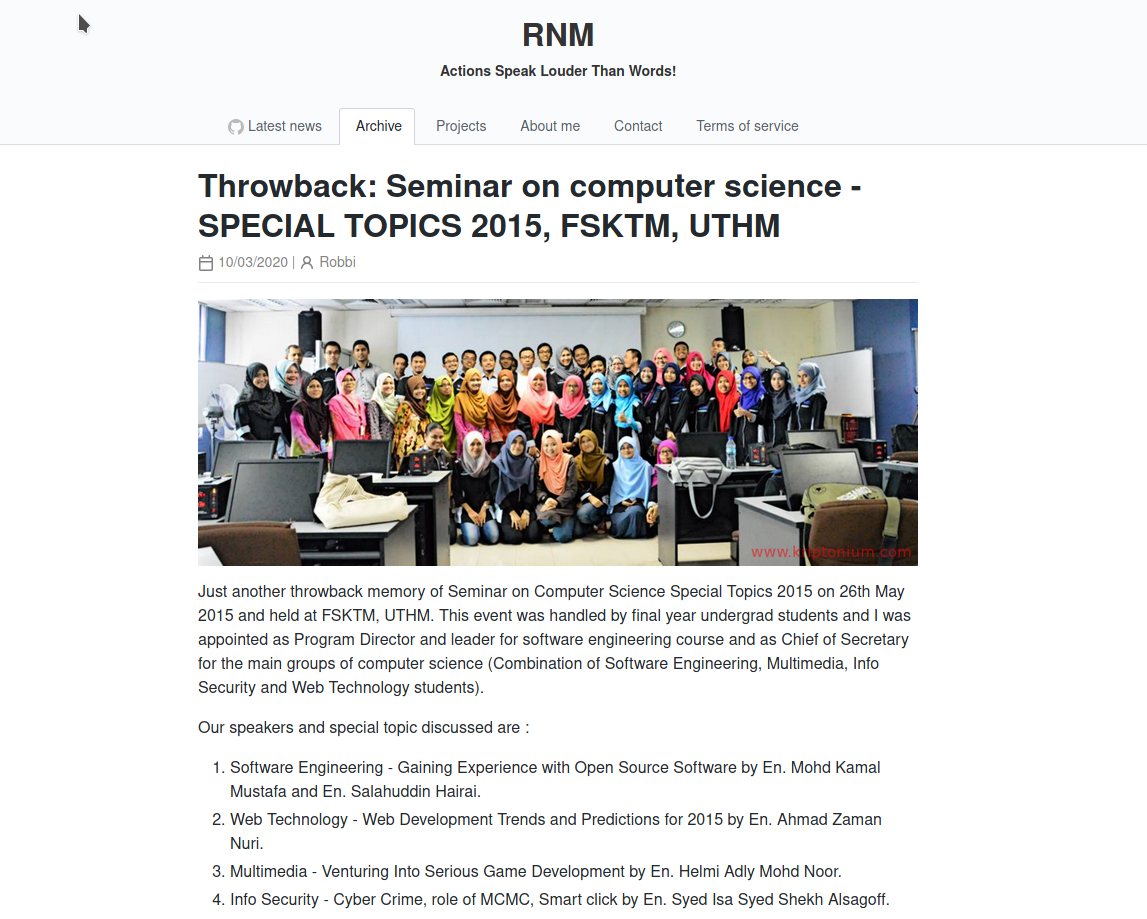 During this time (using Jekyll), I attempt using several theme and various Ruby gems. I barely remember it how may time I do changes and tweak from time to time and I gained more experience. Now, I understand how Jekyll work in behind.

I even published my own gems named jekyll-plantuml-base64 on rubygems.org/gems website. 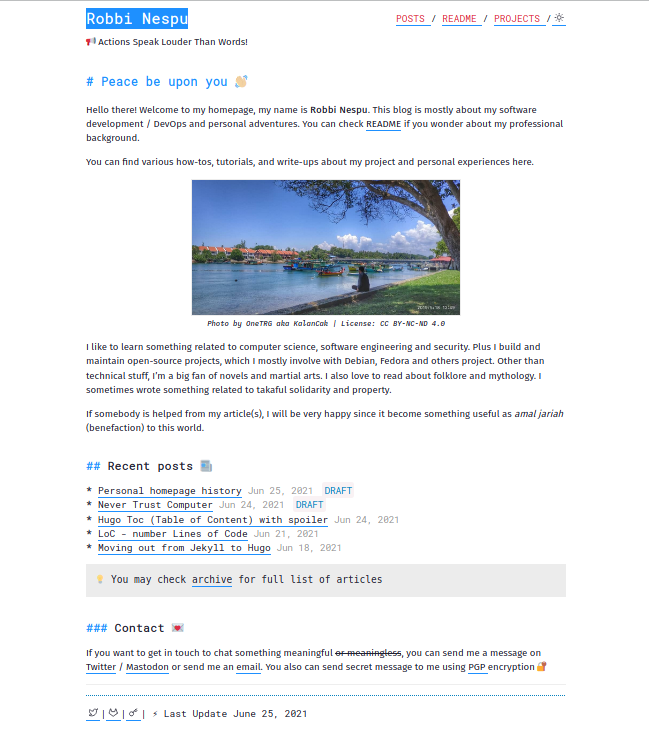 Frustrated with Jekyll build time that take times and complexity of Ruby are higher, I wanting something fast and easy. I heard, Hugo is built using GoLang (Go) and it blazing faster then others programming language. I plan to use Hugo since 2019 but only on mid 2021, I take decision to migrate my Jekyll (homepage version 3.0) to Hugo.

I really satisfied with Hugo. There is no more bundles of dependencies need to be downloaded anymore. I just need Hugo binary to take care everything. For Jekyll, I need Ruby, Bundler and Gems. For Hugo, all you need is Hugo. Plus, it amazingly fast, It can generated 5000 pages just in 5 seconds! There only downside of Hugo are Go community is a bit smaller but they keep growing from time to times.

Have some thoughts, discussion or feedback on this post?

💬 Send me an email